Marie Mockett was born and raised in California to a Japanese mother and American  father, and graduated from Columbia University with a degree in East Asian  Languages and Civilizations. Her first novel, Picking Bones from Ash, was  shortlisted for the Saroyan International Prize for Writing, and a finalist for  the Paterson Prize. She has written for The New York Times, Salon, National  Geographic, Glamour, and other publications and has been a guest on Talk of  the Nation and All Things Considered on NPR.

In 2013, Marie was awarded a  Fellowship by the NEA and Japan US Friendship Commission, which enabled  her to live in Japan. While there, she was featured in the NHK (Japanese  National Broadcasting) Documentary, Venerating the Departed, which was  broadcast internationally several times. Her memoir, “Where the Dead Pause,  and the Japanese Say Goodbye,” was published in January 19, 2015 and examines how the Japanese overcome extreme grief and disaster, against the backdrop of the 2011 tsunami and Marie’s own family temple in Japan, located 25 miles from the Fukushima Daiichi Nuclear Power Reactor.

“Where the Dead Pause” as been widely praised by NPR, the San Francisco Chronicle and the New York Times, and has been chosen as an Indie Next Pick, a Barnes and Noble Discover Pick and a New York Times Editor’s Choice. Of her book, the New York Times wrote: “An intriguing… travelogue through a landscape of Japanese spiritual belief, with forays into history, folklore, and memoir. [Mockett] has the ability, fully available only to those on the margins, “to see through more than one set of eyes, if one learns to pay attention to one’s environment.” It is this gift of double-sightedness, of bringing to bear both the “dry” rationality of the West and the “sticky” sensibilities professed by the Japanese, that makes this the most interesting book so far to have come out of the disaster.” (Richard Lloyd Parry – New York Times Book Review) 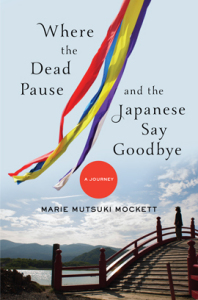